The First Weeks of September

September does not come quietly. It elbows its way into the last of summer and shakes you to your foundations with its sudden requirements, quickened pace, and unyielding schedules. The beginning of the academic year is awkward and jarring - who ARE all these new students? What are their hopes, aspirations, and energies - and can I guide them gently but surely through their courses of study? What am I doing here, on stage, in lecture, when only a few weeks ago I was walking the warm sand on a Maine beach, enjoying the interplay of sky and cloud?

Even the solitary places are shaken by the changes brought by September. I found time today for a fast hike at Audubon's Broadmoor Wildlife Sanctuary,  and it was apparent that summer was fading fast in the woods, ponds, and meadows. The angle of the sun's rays encouraged haste, not relaxation. A comfortable stroll was impossible.  Jog down the path, clamber up the rocks, don't linger too long at the overgrown pond. The river, low and sluggish in its course, seemed oily and forbidding in the growing dusk.

No doubt about it, I am not making an easy transition this year to the post-summer academic life. Yes, there is joy to be found in the renewed energy of college life. Campuses once again are places of promise and excitement. But I long for Maine.

Life in Maine is changing too, rapidly changing. There is a palpable nip in the air in the morning, and sweaters need to be layered over t-shirts. In the garden, some annuals have already given up the ghost. I have cleaned the remnants of the cucumber vines and the green bean bushes out of the vegetable garden raised beds. The sunflowers, alas, will be next. Hot peppers are almost finished, as is the miniature sweet corn. But the zinnias, the wonderful tomatoes, and the mixed leaf lettuce are still producing abundantly. Some of summer still remains!

But nothing beats the stunning simplicity of a single dinner-plate sized dahlia! This is on my kitchen window sill.


A bit of fall color near the side door

There's probably no summer crop I anticipate more avidly than ripe, homegrown tomatoes. They are just coming into their own now in the garden, and may - with luck - continue for some time yet.

This late-summer abundance makes possible one of my all-time favorite breakfasts. So simple: ripe tomato slices on hot, freshly-buttered sourdough toast. With a sprinkle of sea salt and a grind of pepper. So luscious! I could eat that meal every day.  And for the past week or so, I have been treating myself often.

Tomato time also encourages me to make some favorite recipes. I have already made a batch of green tomato chutney, which is splendid with roasted meats such as pork. And there are tomatoes roasted in the oven with olive oil, garlic cloves, and salt and pepper. A baking pan of roasted tomatoes can easily be frozen, and will form the basis of marinara, pizza, and cacciatore during the winter.

But my favorite tomato time recipe is one originally published in the late, lamented Gourmet magazine in an essay by Laurie Colwin. It's a recipe for a fresh tomato pie in a homemade biscuit crust. It is so delicious that I have seen people go back for thirds and frown if there isn't just a smidgen left for fourths. Laurie was a prodigiously talented writer of fiction, and remains my favorite food writer of all time. Her essays for Gourmet, collected in two volumes with the unassuming titles Home Cooking and More Home Cooking, are classics that belong in every serious cook's collection.

Laure's recipe for Tomato Pie is almost as scrumptious to read as it is to taste - so I will allow her to tell the recipe:

"I have never yet encountered tomatoes in any form unloved by me. Often at night I find myself ruminating about two previously mysterious tomato dishes, which I was brazen enough to get the recipes for. One is Tomato Pie and is a staple of a tea shop called Chaiwalla, owned by Mary O'Brien, in Salisbury, Connecticut. According to Mary, the original recipe was found in a cookbook put out by the nearby Hotchkiss School, but she has changed it sufficiently to claim it as her own. The pie has a double biscuit-dough crust, made by blending 2 cups flour, 1 stick butter, 4 teaspoons baking powder, and approximately 3/4 cup milk, either by hand or in a food processor. You roll out half the dough on a floured surface and line a 9-inch pie plate with it. Then you add the tomatoes. Mary makes this pie year round and uses first-quality canned tomatoes, but at this time of year 2 pounds peeled fresh tomatoes are fine, too. Drain well and slice thin two 28-ounce can plum tomatoes, then lay the slices over the crust and scatter them with chopped basil, chives, or scallions, depending on their availability and your mood. Grate 1-1/2 cups sharp Cheddar and sprinkle 1 cup of it on top of the tomatoes. Then over this drizzle 1/3 cup mayonnaise that has been thinned with 2 tablespoons lemon juice, and top everything with the rest of the grated Cheddar. Roll out the remaining dough, fit it over the filling, and pinch the edges of the dough together to seal them. Cut several steam vents in the top crust and bake the pie at 400 degrees for about 25 minutes. The secret of this pie, according to Mary, is to reheat it before serving, which among other things ensures that the cheese is soft and gooey. She usually bakes it early in the morning , then reheats it in the evening in a 350 degree oven until it is hot.

It is hard to describe how delicious this is, especially on a hot day with a glass of magnificent iced tea in a beautiful setting, but it would doubtless be just as scrumptious on a cold day in your warm kitchen with a cup of coffee."


I usually don't bother to peel the tomatoes, by the way. Extra fiber and flavor!

I beg you to make this pie - you will not regret it, and you will definitely remember it the next time tomatoes ripen by the boxful in late summer. 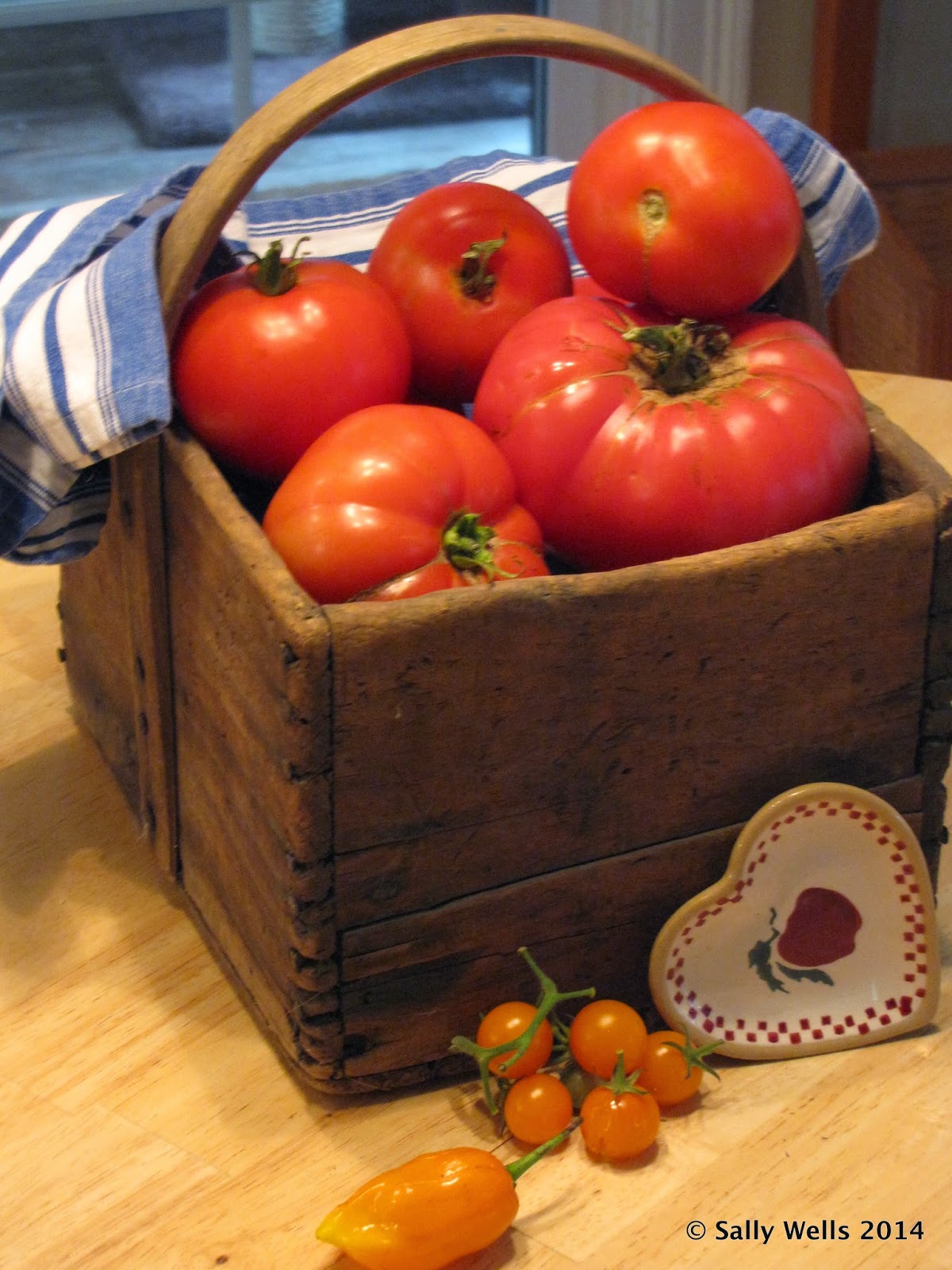 Posted by Sally Wells at 7:50 PM No comments: