From Spring into Summer : A Photo Essay


The summer solstice is barely past, and we are enjoying the longest days of the year in the Northern Hemisphere. The change of seasons is an occasion to enjoy some simple pleasures: the feel of warm sun on bare skin, the taste of the first grilled meats and vegetables of the year, a sweet nap on a warm afternoon, and the multiple sensory stimuli of a well-kept garden.

Oh, and of course, changing the outdoor decor to fit the new season ...


A well-kept-garden? Well, sometimes it is. Right now, roses are coming into bloom, the peonies are making a glorious show, and we are about to harvest the first sugar-snap peas. Arugula has already been re-planted and the French breakfast radishes have gone by. Here is a photo of the just-rising peas and their supports, taken about a month and a half  ago:

The spring was glorious in its own way. After the awful winter - 5-6 feet of snow from storms in late January and February - it seemed like forever until the first spring flowers made their appearance. Of course, once they did, their season was over in a flash. Long winters often mean short, delayed springs. To help recall that quick burst of spring brilliance, here are some photos from late April and early May:

And now the peonies and the roses are making their show. Can there be anything more splendid than a lush centerpiece bouquet of peonies? My German grandmother only cultivated two types of flowers in her garden (well, yes, there was the spirea and the bleeding heart, but those didn't count), because she only loved those two types of flowers: gladiolus and peonies. And she grew them expertly. Early-summer dinners in Duluth always featured a bowl of her pink peonies at the center of the table - their fleeting scent somehow gave the fried chicken and green beans and homemade bread an extra savor.  In late August, we celebrated my brother's birthday with a homemade iced white layer cake and a huge crystal vase of multicolored glads.  When I began to work as a florist during high school and college, I was disappointed to find that the floral trade relegated gladiolus to funeral arrangements, or the occasional altar arrangement for a wedding. To me, they always meant high, hot, heady Midwestern summers that were just beginning to fade towards September, school, and schedules. Celebrations, and never sadness. To this day, if I send a funeral arrangement, I will always specify that glads not be used. They are possessed of too much joy for the occasion.

My grandmother was definitely an artist in the kitchen, and in her gardens. I swear she could make anything from scratch, and delighted in doing so. And her flowers were always the talk of the neighborhood. But she dreamed of being a visual artist. Salvador Dali and Pablo Picasso were her heroes,  and she enjoyed sharing her artistic sensibilities with her (stunned) daughters-in-law (two of whom were  - and still are - splendid artists in their own right).  I, too, was absolutely amazed to discover this about my elegant, thrifty, and (so I thought) strictly proper grandmother. My (artist) aunt told me one evening when I was visiting her in North Carolina that my grandmother's sense of color, proportion, and composition were impeccable - and that her love for Dali stemmed from the fact that he had all of those same sensibilities, and upended every one of them in his paintings.  It allowed me to appreciate my grandmother as someone as rebellious as I had always been. Maybe that's why she stayed with me, hellion that I was as a girl. I think she may have seen herself in my wildness and stubborn nature.

So, Grandma, here are some of my peonies and roses. For you. Thank you.

I went looking for rhubarb recipes after I scored some local stalks at the supermarket.  I wanted to go beyond the usual strawberry-rhubarb pie (which is delicious, don't get me wrong ...) and found an easy and straightforward recipe for rhubarb sorbet. I'd had rhubarb sorbet with a version of chess pie at a restaurant in Boston recently, and it was the sorbet I had remembered most. Why not give it a try?

I found this recipe in an old Gourmet magazine (June 2005, for you collectors out there), and it fit the bill nicely. Easy, dairy-free, and luscious. I served it to guests next to a slice of lemon chess pie and a couple of fresh local strawberries. June on a plate!

Wash, trim, and chop one pound of rhubarb (about 3-4 cups). Add to the fruit 1/2 cup plus 1/3 cup sugar, and one tablespoon light corn syrup. Stir, and allow to macerate for 30 minutes. Then, bring to a slow boil over moderate heat, and simmer until the fruit is very tender, stirring often. This will take 10 to 15 minutes. Puree the mixture in a blender (Take care! It's very hot!) until almost perfectly smooth. Depending on the color of your rhubarb, you may wish to add a small drop of red gel color to the puree; it turns the final sorbet an appetizing light pink. Pour the puree into a metal bowl, and set into a larger bowl of ice and water to cool quickly.  Stir the puree often until it has cooled completely; this may take up to 20 minutes.  Freeze the sorbet in an ice-cream freezer. This takes a while; the change in the texture of the mixture is astonishing - it gets thick and very smooth. When the sorbet is frozen, pack it into a freezer container and allow to ripen for about an hour before serving. The taste is pure sweet rhubarb, but the texture will make you think of the richest ice cream ... all without a drop of milk!

P.S. : Obscure Literary Reference. Bonus points for those who get it. 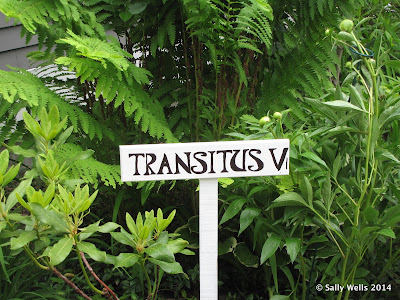