The Season of Quickening

September - a month of in-betweens.  This month brings a number of changes to navigate - the languid ease of late summer gives way to the burst of activity, regularity, and purposefulness that attends the return to school, work ... reality. September really marks the beginning of the new year, which ancient agricultural societies knew well. Once harvests had begun, the dreaded Hungry Time came to an end with rejoicing.

We in modern societies have lost that seasonal touchstone - which is great from the standpoint of being able to feed more people in reliable fashion. Food security for more and more people is a mark of enormous progress, and we still have a long way to go to fully achieve this worthy goal. But in making almost every food available almost all of the time, we've also lost the sense of assurance that the community would make it through another year because of the labor of the growing season and the bounty of the harvest. This loss is not merely circadian but - more importantly - historical and societal. That sense of assurance tended not only to bind communities to their agricultural pasts, but also fostered recognition of our dependence on others in the community, and upon the natural world that nurtures us all.

That assurance is the foundation of the Thanksgiving celebration - something that's hard to remember in the US, because of the accident of its late-November placement. I think Canada gets it about right. The second Monday in October is a time in the year when it's possible to capture some of the flavor of the old harvest-festival celebration, and it also permits the holiday to stand alone, unmarked by the looming onset of The Holidays.

We were able to experience Thanksgiving in Canada last year, because we were fortunate enough to attend the North Atlantic Fiddle Convention (NAFCo) conference and festival in Cape Breton, Nova Scotia. Paul and I presented a research paper at the conference, and enjoyed the music of the Celtic Colours Festival, which was linked with NAFCo. But one of our most fondly-remembered experiences from the trip happened on our first night in Sydney, Nova Scotia. On the evening of the second Monday in October, we finished a nine-hour drive and checked into our suite at a marvelous downtown hotel. We were tired and hungry. We came downstairs to find that Thanksgiving dinner was being served in the hotel dining room. Turkey, all the trimmings, wonderful apple crisp - it was more than mere hospitality. It was home. Harvest Home, actually.

The good news is that we're going back to Celtic Colours this year! No conference this time, but lots of music - and the promise of yet another Thanksgiving feast celebrated while the October sun sets in the west.

Thanksgiving, of course, is not the only celebration of the harvest in North America. The New England agricultural fairs that begin in August and run into October began as rural community celebrations of life on the farm: the finest animals, the best produce, and local triumphs from the oven, the sewing machine, and the sugarhouse are all on display. And yes! There are the rides, and the horse-draws and the oxen-pulls ... and the ice cream!

As we often do in late August, Paul and I visited the Cummington Fair in western Massachusetts again this year. Cummington is Paul's home town, and the Fair was a highlight of his formative years, spent on a beautiful and prosperous farm just up the hill from the fairgrounds. He had no trouble imparting his love of the Fair to me, and now I look forward to it every year as well. Here are a couple of photos from one of my favorite places at the Fair, the Exhibit Hall, which houses displays of produce and craft from local communities:


On the way back from Cummington, Paul surprised me by stopping in Shelburne Falls, at the Bridge of Flowers. Seeing the Bridge is always a major treat. Here are a few photos of that lovely day:

A few photos from the September garden

An arrangement of late roses and lime-green licorice plant 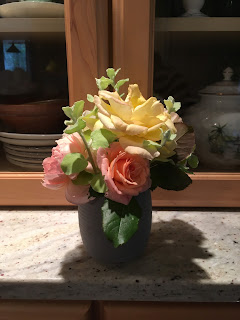 A recipe from the box

Why is it that when you go looking for a recipe for an old-fashioned treat, it is often SO difficult to find? In this case I mean a straightforward recipe for blondies (called by some blonde brownies). Everyone knows what they are, and I'll bet everyone can taste them subliminally. But just TRY to find a recipe! Gourmet cookbook? Nope. Not the Times cookbook, not even the Settlement or Joy of Cooking. Better Homes and Gardens (even my Mom's edition!) never heard of them. Martha couldn't be bothered, but how about Marion Cunningham? Not a word. Epicurious? Good luck.

I needed a recipe for blondies to bring to the family cookout at the farm during the Cummington Fair. I promised baked beans and blondies ... and once you do that, you've got to deliver.

Then came Paul to the rescue! His Mom's recipe box is crammed full of hand-written cards for delicious and interesting things (switchel, anyone?). And - there it was. Well, not blondies exactly, but something just as wonderful: Butterscotch brownies.  What are they like? Well, imagine a blondie. Now, imagine it taken to the max, in every way. That's a butterscotch brownie. Okay, okay, here's the recipe. Make 'em and swoon ...

Melt 2 cups butterscotch bits (that's just about exactly a 12-oz bag of bits) with 1 stick butter in the microwave. Careful when you do this! Cut up the butter, and add it with the bits to a microwave-safe bowl. Cover the butter and bits with a piece of wax paper (or better yet, the butter wrapper) and microwave in short (30-second) bursts, stirring between bursts. Stop heating the mix before it is totally liquid; the residual heat, plus some stirring, will finish the melting. It will be a gooey mess in any case, but try not to heat it to the point where the butterscotch begins to separate. Everything will still work if it does separate, but the texture will be better if it doesn't.

Whew! Now, you can proceed with the rest of the recipe. Generously butter a 13" x 9" pan (I use glass) and preheat the oven to 350 degrees.

Add to the melted butterscotch and butter 2 cups packed brown sugar, and let cool for a few minutes. Beat in 4 eggs and 1 tsp. vanilla extract. In another small bowl, whisk together 2 cups all-purpose flour, 1 tsp. salt, and 2 tsp. baking powder. Add these dry ingredients to the batter, along with 1 cup chopped walnuts. Pour into the pan, and smooth the top. You can add more walnuts to the top if you like.

Bake for about 35-45 minutes. The center of the brownies should just be firm (not jiggly), and the edges should have begun to pull away from the pan. Let cool completely, and cut into small squares. Makes about 40 butterscotch blondies.